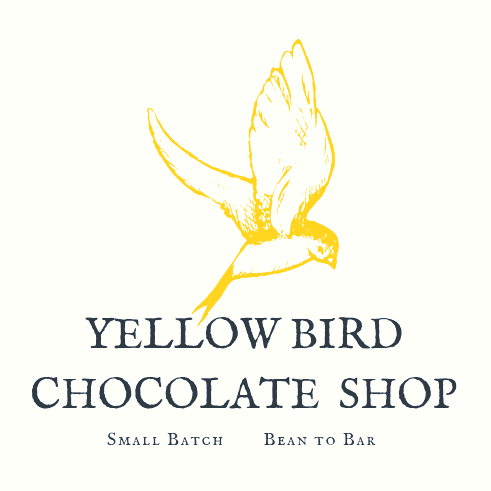 Tuesday afternoon Yellow Bird Chocolate Shop owner Jenny Risner-Wade invited the public to visit her new courtyard located behind her store which is at 306 South Superior in downtown Albion. A group of around 30 family, friends, business owners and the public joined her as she launched the newest addition to her business.

Located behind the business, she has developed a courtyard that she will use for different events such as classes she holds. The courtyard has long been on her mind. When she first opened, she gave me a tour and took me to the area and described what she wanted to accomplish. A place for customers to relax and be outside while enjoying chocolate and coffee.

As I entered the area, I saw exactly what she had described, a quaint place with a few chairs, tables and silence in a busy downtown. The entire area is decorated with beautiful murals on the walls drawn by her mother-in-law Diana Wade. Her daughter Ann Wade did the calligraphy making all the art personal to her.

Jenny took a few moments to talk to those in attendance about the Michigan Economic Development Corporation (MEDC) grant she applied for and received.

That MEDC money was used to upgrade her equipment and building. Click Here for a story done in December of last year before her changes. Now with the interior changes she envisioned mostly complete she concentrated on her courtyard. Take a moment and stop in to see all the changes. For now, look at these pictures to give you an idea of what has been accomplished.